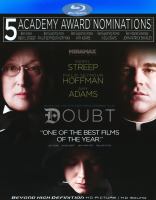 1964, St. Nicholas in the Bronx. Father Flynn is a charismatic priest who is trying to upend the schools' strict customs, which have long been fiercely guarded by Sister Aloysius Beauvier. The Sister is the iron-gloved principal who believes in the power of fear and discipline. With the winds of political change, the school has just accepted its first black student, Donald Miller. But when Sister James shares with Sister Aloysius her suspicion that Father Flynn is paying too much personal attention to Donald, Sister Aloysius sets off on a personal crusade to unearth the truth and to expunge Flynn from the school. Now, without any proof, besides her moral certainty, Sister Aloysius locks into a battle of wills with Father Flynn. This threatens to tear apart the community with it's irrevocable consequence.
Publisher: Burbank, CA : Walt Disney Studios Home Entertainment, p2009
Edition: Blu-ray version widescreen version
Branch Call Number: BLU-RAY D DRAMA
Characteristics: 1 videodisc (104 min.) : sd., col. ; 4 3/4 in
Additional Contributors: Shanley, John Patrick
Streep, Meryl
Hoffman, Philip Seymour 1967-
Adams, Amy
Davis, Viola 1965-
Foster, Joseph II
Miramax Films
Walt Disney Studios Home Entertainment (Firm)

Had no idea what it was about (since I started it without even bothering to read the description.) but I really enjoyed it. Not the best movie I've ever seen, but the acting by Philip Seymour Hoffman, Meryl Streep and Viola Davis was amazing. Meryl Streep's character was almost villain-like and her expressions never wavered through the movie. I like movies that take place in churches and schools and although I've never been to Catholic school or brought up in this era, I felt for the priest, especially during the explosive scene between Hoffman and Streep. The most powerful scene for me came during one of Hoffman's sermons where he was telling a story about gossip. I won't go into it but it really opened my eyes and I wonder if that was the writer's intent. I can see why the original play won a Tony and why the actors/actresses were nominated for this film. Very nice surprise to find this

This is a slow moving story. The script takes place about 1965. It shows how strict the catholic schools were with discipline. In this story the priest was trying to be more human yet strict with the kids. The Head Nun was very traditional. The HN was never human like to kids. The HN never said thank you or smiled. The HN never touched the kids except to discipline. The priest trying a soft touch on the shoulder and a smile in his approach. The priest was protecting the first black student in the school from being physically abused by the other kids. The HN falsely accused the priest for acting in a sexual abuse for the black child. This movie demonstrates how society was changing it's approach to child rearing and education.

Thank you Meryl Streep, Hoffman, Davis and Adams! The characters were real enough to be an interesting story about a yet another controversial subject. I've read comments about some interpreting Hoffman's character being a molester. I didn't get that vibe surprisingly, as that's what I went into the movie thinking. We've all heard the scandal of priests with boys. I thought the priest in the story was helping the African boy to live a religious life yet still be gay (his mother even said he had "tendencies" and that's why his father beat him) Hoffman tends to play strong, thought provoking characters so I'm staying with this line of thought until proved otherwise. This make me "Doubt" my strong dislike of ALL priests because I'm an advocate for gay rights.

Riveting performances from Meryl Streep, Amy Adams, and Philip Seymour Hoffman. The characterizations are so well balanced. Meryl Streep gives us yet another persona we have not seen from her. The neighborhood, interiors and scene settings capture the austere ambiance of the time period and locale. The film has a storytelling economy. "Doubt is the only certainty."

This is a 2008 American drama directed by John Patrick Shanley, based on his own stage play "Doubt: A Parable."
It is a gripping, suspense-filled and profoundly thought-provoking drama with riveting performances of the main actors.
I know that a woman like Sister Aloysius exists, and I hate but admire such a woman at the same time.
And I also know that a man like Father Flynn exists, and I like such a man on the surface but detest him from the bottom of my heart.
It is really a nice movie.

I got a little bored watching this. I was just checking out some Phillip Seymour Hoffman movies, and thought this one might be good, but I wouldn't recommend it. It gave me something to think about, but only at the very end!....I just read Nursebob's comment....he/she obviously got a lot more out of it than I did, so maybe don't take my opinion to heart!

“What do you do when you’re not sure…” intones Fr. Flynn during a Sunday sermon, “…doubt can be a bond as powerful as certainty.” This pretty much sets the tone for Shanley’s brilliantly executed drama about an embittered mother superior who accuses Flynn of molesting a child at the school where she resides as principal. Armed only with a misguided sense of righteousness, Sr. Beauvier begins a one-woman witch hunt designed to make her unfounded suspicions a reality, even violating her own moral code in order to do so…“In the presence of wrongdoing, one steps away from God” being her only justification. In order to truly appreciate what Shanley has done we must look at the period in which the film takes place, the early ‘60s. The nation was still reeling from the assassination of Kennedy, cold war paranoia was in full swing, and Pope John XXIII was trying to drag Catholics into the 20th century with the Second Vatican Council. While Fr. Flynn openly embraces the spirit of change sweeping the church Sr. Beauvier remains dour and rigid, not even allowing ballpoint pens into the classroom. Torn between these two extremes is Sr. James, a young novice who teaches history. Possessed of a certain naiveté, or maybe just a greater faith in the basic goodness of people, she is at first drawn into Beauvier’s web of suspicion then later horrified by the old woman’s monomaniacal crusade. Shanley’s use of natural elements to provide counterpoint to the film’s narrative is superb; storms and tempests battle overhead while a mighty wind buffets the church doors. He also employs subtler imagery to great effect whether it be the stained glass eye of God or a statue of the Virgin casting a shadow on a garden wall; and a simple burnt light bulb has never held such import. Lastly, despite all the empty hearsay and innuendo, he introduces just enough doubt into the story to make us question our own convictions as to what really happened. A completely engrossing drama highlighted by some magnificent performances including Viola Davis’ turn as the young boy’s mother whose reaction to the accusations took me completely off guard. Bravo!

I shall not forget Sister Aloysius Beauvieer, played by Meryl Streep anytime soon. Just look at her picture of the DVD box. That is the lady who plays the iron fisted by the rules principal of a Catholic School. Her work in this film is amazing. She made me hate her so much for all her evil ways. I don't want to tell too much of the plot, but the whole cast is wonderful. The story is controversial and that might explain why it get varying reviews. The movie caught my imagination and felt very real. I felt the persecution of Phillip Seymour Hoffman in the character of Father Flynn. You can't help but feel the pain and suffering he is going through. All the issues we see on television every day are here in Doubt. They may not be pretty or a love story, but they are truly real problems facing real people. Watch the film for me please. See what you think and leave me a message here. I have given you my honest opinion. I look forward to reading your reaction to Doubt.

Excellent acting, but a real downer.

raghoud87 thinks this title is suitable for 13 years and over

bdls206 thinks this title is suitable for 13 years and over

hur74Vety thinks this title is suitable for 13 years and over

bluedragon123 thinks this title is suitable for 13 years and over

nadian thinks this title is suitable for 13 years and over

Sexual Content: Nothing is shown, but it deals with subject matter that younger children may not understand, or should not understand yet

Father Brendan Flynn: Doubt can be a bond as powerful and sustaining as certainty. When you are lost, you are not alone.

Where is your compassion?
Nowhere you can get at it.

You haven't the slightest proof of anything!
But I have my certainty!

Set in a Catholic school in the 1960’s, this movie deals with the abhorrent subject of sexual abuse amid the Catholic Church.
Different reactions are depicted especially from the victim’s mother and some of the nun’s naiveté in the face of what is happening even when it becomes seemingly evident.
The words “sexual abuse” are cleverly never uttered throughout the movie, instead subtle implications and increasing blatant insinuations are played out as the movie evolves.
Uncommon and contentious subject matter make this movie different from the usual run of the mill movies out there these days. Good actors and enough suspense to keep your interest throughout the film until the very end.

In a Bronx Catholic school in 1964 a popular priest's ambiguous relationship with a troubled 12 year old black student is questioned by the school's principal.