Saved Searches Advanced Search
Our building is closed and the bookmobile will not make stops through May 3 to help contain the spread of COVID-19.
Print 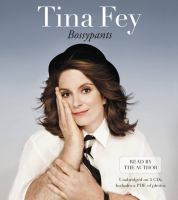 From her youthful days as a vicious nerd to her tour of duty on Saturday Night Live; from her passionately halfhearted pursuit of physical beauty to her life as a mother eating things off the floor; from her one-sided college romance to her nearly fatal honeymoon, comedian Tina Fey reveals all, and proves that you're no one until someone calls you bossy.
Publisher: [New York] : Hachette Audio, p2011
Branch Call Number: B F4336.bo
Characteristics: 5 sound discs (5 hr., 30 min.) : digital ; 4 3/4 in
Alternative Title: Bossy pants

If Tina Fey's name alone won't persuade you to listen to this audiobook, maybe the fact that Bossypants was named Audiobook of the Year at the 2012 Audie Awards will. Fey talks about her life, career, motherhood, and rise to fame but this isn't your typical celebrity bio! She makes you laugh, an... Read More »

Tina Fey is the ultimate boss. She's brilliant, hardworking and wildly hysterical. I dare you to get through a chapter without wiping away tears of laughter. Tina reads her own audiobook and I highly recommend listening to it in her voice. However if you choose this route (instead of the book) you will miss photos of a particularly bad white denim choice made by Tina in her early 20s.

That was the fastest 5.5 hours have ever flown by. Tina Fey on writing, acting, motherhood, SNL, and 30 Rock. She also does a mean Lorne Michaels impression.

At times poignant and meaningful. At other times, surprisingly tone deaf and uncomfortable. Her self-deprecating humor is enjoyable, but feels misguided and out-of-touch when she body shames herself and other, endorses harmful stereotypes of the LGBT+ communities, and waxes poetically about her rise to success while ignoring her white upper middle class privilege.

It's worth the 4.5 hours....it really is!
It may not be a 5* worthy book, but I gave it 5* anyway....like others I had already listened to Amy Pohlers, and Mindy Kahling...THIS BOOK was the first of the format.
Tina Fey started this trend of famous comedian biographies..and it deserves credit for that. Amy's was maybe better, but Tina's was first, and was still exceedingly entertaining and funny.

This audiobook had me laughing so hard at times. I liked that she had a lot of topics that I could relate to and, despite it being autobiographical, it was funny. I had already listened to Amy Poehler's book, Yes, Please. While these two are both funny women, I definitely laughed more listening to Bossy Pants. The Saturday night live skits relative to Sarah Palin were truly awesome/funny and it was interesting to hear about the dilemma Tina faced during that time. It showed she had to balance comedy with politics and how the portrayal could be seen as endorsing certain candidates or being too harsh. Eye opening about Tina Fey and funny too. Smart and successful woman that is self-made and her self-deprecating humor has the right balance.

This kind of humor doesn't work for me.:) I found it interesting, that grown up people find toilet jokes as funny as toddlers do. Is this something about us, humans? :) It is also interesting to see how the comedy industry works. Tina Fey is a sharp lady, very bright... I wonder why she likes this business :))

Read by author. Nice to learn what she had to do before she found success.

Good, but not as funny or inventive as Amy Poehler's

Tina Fey and I were born the same year. We both promote the benefits of the "yes, and" improv sensibilities.
And with that, the similarities end. Still, I did learn a great deal about Saturday Night Life, 30 Rock, and her creative process.
For fans of comedy, entertainment, or great stories of growing up as a member of Generation X, this is the book for you.

Audio books that are narrated by the author are usually at the top of my list. Audio books that written by Tina Fey and narrated by Tina Fey are in a league all of their own. This audio book had me laughing so hard that there was one time I actually had to pull my car over because I was laughing so hard I started to cry. The one big question that was never answered, and probably never will be is...how did Tina get that scar on her face??

crtiroff thinks this title is suitable for 18 years and over

angeliquelong thinks this title is suitable for 17 years and over

Brown_Dog_365 thinks this title is suitable for 14 years and over

cwu89 thinks this title is suitable for 16 years and over

MomoT thinks this title is suitable for 15 years and over

marishkajuko thinks this title is suitable for 14 years and over

Lisalicious thinks this title is suitable for 16 years and over

All Beyonce and JLo have done is add to the laundry list of attributes women must have to qualify as beautiful. Now every girl is expected to have Caucasian blue eyes, full Spanish lips, a classic button nose, hairless Asian skin with a California tan, a Jamaican dance hall ass, long Swedish legs, small Japanese feet, the abs of a lesbian gym owner, the hips of a nine-year-old boy, the arms of Michelle Obama, and doll tits. The person closest to actually achieving this look is Kim Kardashian, who, as we know, was made by Russian scientists to sabotage our athletes.

If you retain nothing else, always remember the most important rule of beauty, which is: who cares?

"If you retain nothing else, always remember the most important Rule of Beauty. 'Who Cares.'"

My daughter has a reversible doll: Sleeping Beauty on one side and Snow White on the other. I would always set it on her bed with the Snow White side out and she would toddle up to it and flip it over to Sleeping Beauty. I would flip it back and say, “Snow White is so pretty.” She would yell, “No!” and flip it back. Not even three years old, and she knows that yellow hair is king. And, let’s admit it, yellow hair does have magic powers. You could put a blond wig on a hot-water heater and some dude would try to fuck it.

Why do I call it “yellow” hair and not “blond” hair? Because I’m pretty sure everybody calls my hair “brown”. When I read fairy tales to my daughter I always change the word “blond” to “yellow”, because I don’t want her to think that blond hair is somehow better.

Anyone who likes the television shows Saturday Night Live or 30 Rock will be a big fan of Tina Fey. Since I watch neither, I was skeptical about liking her memoir, expecting it to be a name-dropping, pop-culture bit of fluff meant to capitalize on her current popularity. Well, she does drop a few names and references a lot of pop-culture (because that does sell books), but what impressed me was how open she was about how her opinions formed about issues (yes, issues – cleverly disguised amid many anecdotes), her own life epiphanies, and her management style (which no doubt influenced her character Liz Lemon). She mentions the scar that she notoriously hates to mention, but just to get it out of the way – do not expect any sordid details. In fact, aside from a few F-bombs and some observations about the hygiene differences between men and women, there are few shocking tales at all. I hope that does not put off thrill-seeking readers, because this is one funny, laugh-out-loud book. Ms. Fey’s celebrity status may not be relatable, but as a woman and a woman manager, she certainly is. She had the bad haircuts growing up and unrequited crushes. She worked at summer camps and as a minion in larger corporations. She has struggled with weight and body issues (see chapter All Girls Must Be Everything), and - believe it or not - having her voice heard. Having navigated these hurdles and reached celebrity status, Ms. Fey’s account of “celebrity” is refreshingly balanced – it is what we all think as we see endless streams of Photoshopped stars dancing, dieting and rehabbing – it is a weird, weird life of publicity, ratings and critics (see chapter Amazing, Gorgeous, Not Like That). Yet, Ms. Fey treats it as all part of a job that she loves. Yes, her comments are highly acerbic or satirical, but juxtaposed with normal everyday observations they almost always take you by surprise, and will cause irrepressible and sometimes embarrassing snorts or guffaws to escape one’s lips – just in case you happen to be opening your copy on the bus, train or dental hygienists’ office, which will cause you to be “blorft” (see chapter 30 Rock: An Experiment to Confuse Your Grandparents). You are now warned.